“The Townsend family has made the Chicken Pie Shop an institution in San Diego,” Atkins said. “It has thrived for eight decades because it adheres to several core principles: high-quality product, first-rate customer service and an undeniable sense of community. There’s a reason I’ve held more than a few lunch meetings at this wonderful restaurant.”

Senator Atkins will honor the San Diego Chicken Pie Shop, along with many other outstanding small businesses located in the 39th Senate District, on Saturday, June 22, during a reception in San Diego.

“When you look at the 3.9 million small businesses in California, and the 7 million jobs they create, and the more than $65 billion in exports they generate, it’s pretty hard to find another way to say it: Small businesses are the backbone of our economy,” Atkins said. “It’s important to say thank you to the people who contribute so much to our communities and our state.”

The San Diego Chicken Pie Shop, located at 2633 El Cajon Blvd. in North Park, has been specializing in chicken and turkey pies for 81 years.

“I think our restaurant has been successful for so long because my family has stuck to what our customers want, but also because we adapt to changing marketing and delivery systems,” Townsend said. “That’s how we keep longtime diners satisfied while attracting new ones. We’re grateful to Senator Atkins for recognizing the value that the Chicken Pie Shop adds to our community. We’re thrilled to be named Small Business of the Year. 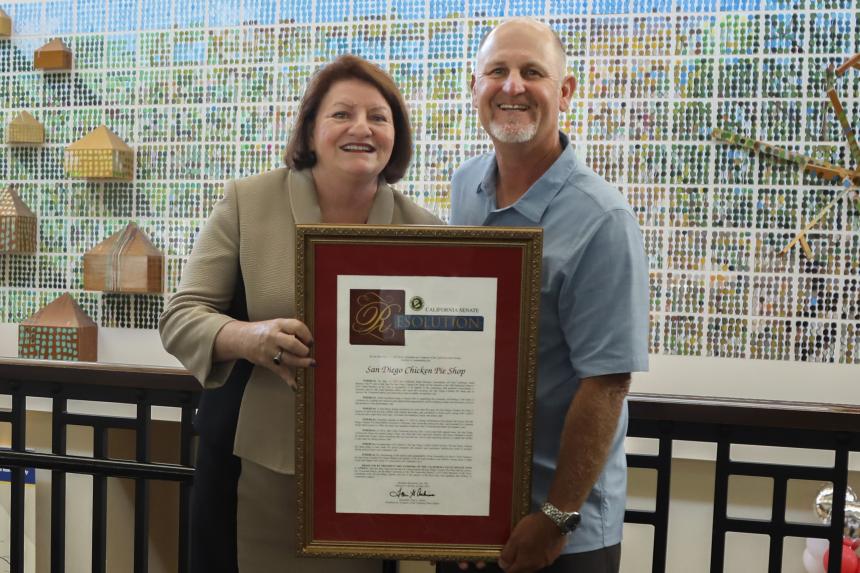 Toni G. Atkins is President pro Tempore of the California Senate. Having previously served as Speaker of the California Assembly, she began her tenure in the Senate in 2016. As Senator for District 39, she represents the cities of San Diego, Coronado, Del Mar and Solana Beach. Website of President pro Tempore Toni G. Atkins: www.senate.ca.gov/Atkins